The weather this April and May has been dire, both for bees and the early flowering plants they rely on for food. It’s the end of May and I’m still feeding my hives. The nucs are getting 1:1 syrup while the colonies are chomping through the last of the fondant. Pollen and nectar are not as plentiful as they should be and the bees are hungry. I’m trying to prevent them from starving to death.

Last year was a steep learning curve. This year continues to pose challenges. My primary aim was to prevent another swarm so as soon as swarm cells appeared, I started to make splits. Bad weather is not conducive to virgin queens having successful mating flights and there’s only a narrow window for this to take place.

I have four nucs with open queen cells, which suggest hatching has taken place but haven’t been able to take a good look inside so can’t confirm the presence of eggs or larvae. These would indicate the new queen is up and laying. It’s also been too cold and wet most days for the foraging bees to venture out and the unseasonable weather is affecting the availability of pollen and nectar. I’m crossing my fingers the predicted spell of good weather in June will help restore the balance.

The situation means I’ve had to take a closer look at the production of pollen and nectar. Like almost everything to do with beekeeping, I knew less than I thought I did. It’s been a useful opportunity to do some background research about the sex life of flowers. 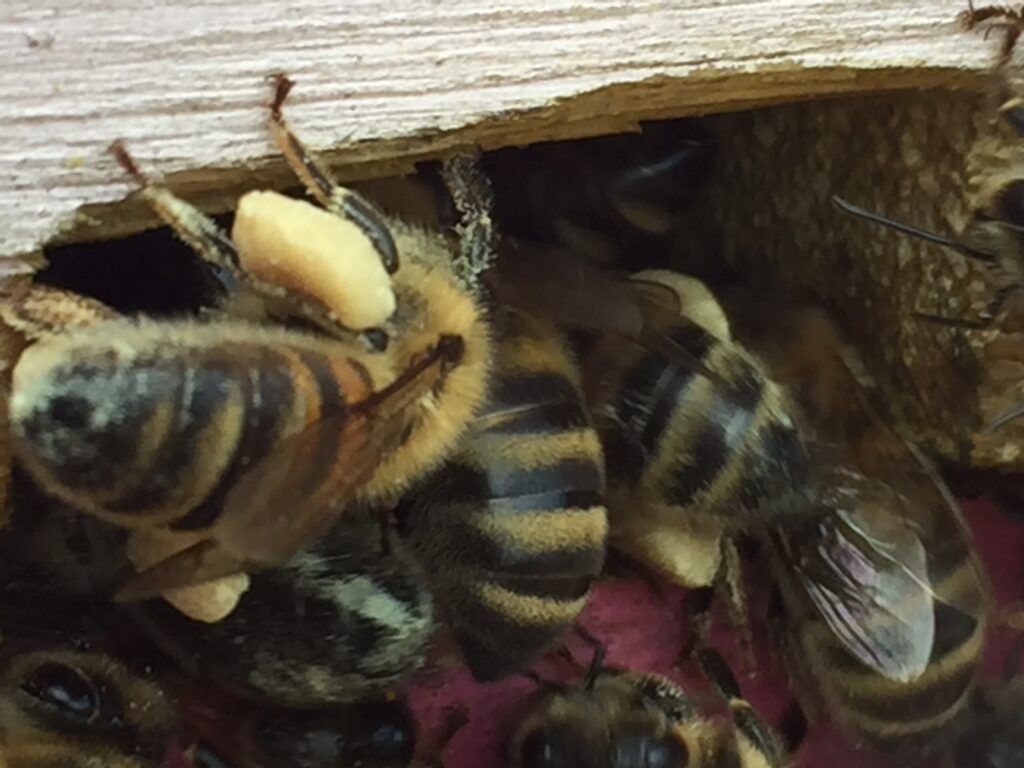 Bees need pollen for protein. It’s collected and stored in pollen ‘baskets’ (corbicula) on the bees hind legs. When a foraging bee finds a good source of pollen, it returns to the hive and performs the ”waggle dance’. This shows other bees how far to travel, and in which direction to go. 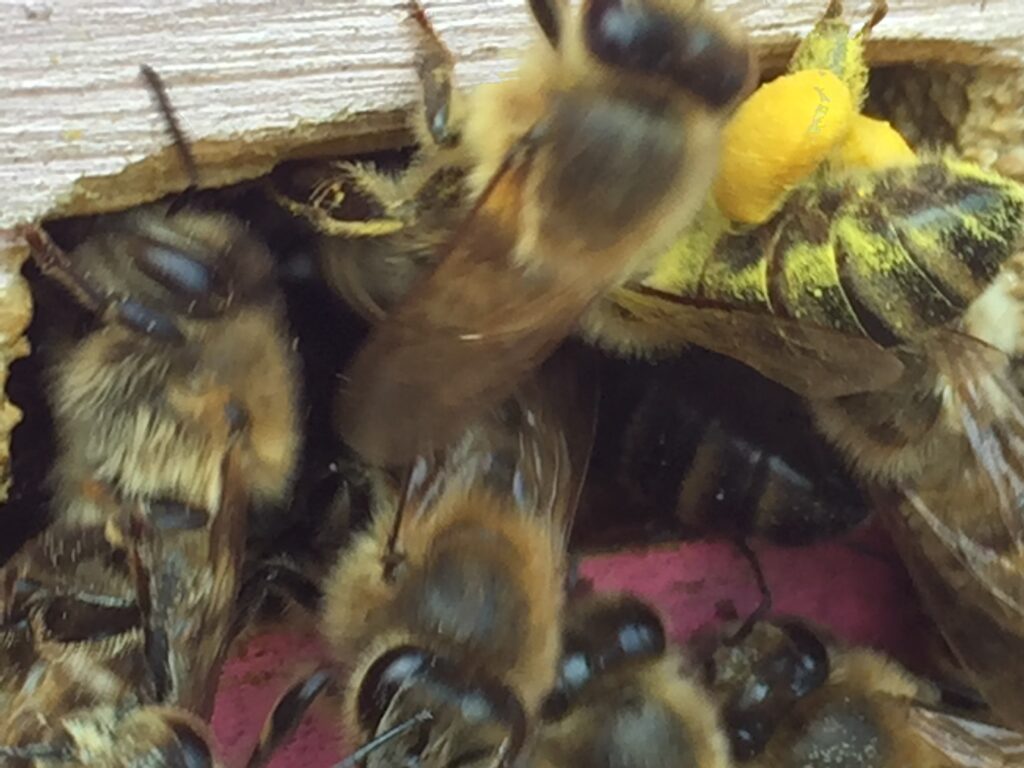 I bought a selfie stick and the photo above shows a bee returning to the hive with a basket of pollen, its body drenched in golden pollen grains. The photo below shows some of the cells where the pollen baskets have been dropped off. They’re waiting to be mixed with saliva and honey to make pollen-bread for feeding bee larvae.

Nectar is the bee’s source of carbohydrate. They have a tongue like a straw which allows the foragers to suck nectar up and out of flowers, before storing it in a stomach sac called the crop.

Back at the hive, some of this nectar is used as food for young bees and the rest is put into cells for future stores. Nectar is easy to spot as the light usually reflects on it. The water content of nectar has to be evaporated so it thickens into what we call honey. it’s passed around from mouth to mouth and the bees also create a breeze by ‘fanning’ their wings. A beekeeper will use a refractometer to determine when the moisture content is between 16-18%. This is the optimum measurement for preventing fermentation once the cells are capped with wax.

Bees need pollen and nectar, but the plants themselves are dependent on insect pollinators like bees for fertilisation to ensure the reproduction of seeds. Plants have male and female anatomies; the Stamen’s Filament and Anther are the pollen-producing and storage parts, with the Pistil containing the Ovaries.

Different flowers store nectar in different places, some being easier to reach than others. The length of the pollinator’s tongue determines which flowers they prefer. For example honeybees like open, flat petals where the pollen and nectar are easy to access, such as Poached Egg Plant, Calendula and Cosmos. Bumblebees have longer tongues so find it easier to reach into flowers like honeysuckle, foxgloves and snapdragons.

Pollen is generally easier to access than nectar. In many species, it brushes on and off the insect bodies as they fly from one flower to another. Some plants, such as the forget-me-not, change colour to signify their available pollen levels, as shown on the inner rings in the photo above.

Pollen comes in a fantastic range of shapes, colours and sizes. Seeing it magnified always reminds me of grains of sand on the beach.

The scientific term is Palynology, while Melissopalynology is the more specific study of pollen in honey. You might find more different types of pollen in an average jar of allotment or orchard honey than you’d expect. The National Honey Monitoring Scheme will tell you what’s in your honey. A beekeeping friend keeps bees on his allotment and the data he received from them is amazing.

I’d expect to see brambles and dandelions but was surprised at there being so many vegetables on the list, in particular turnip, and cabbage, but this is exactly what beekeeping has been like for me; one long and continual journey of discovery. 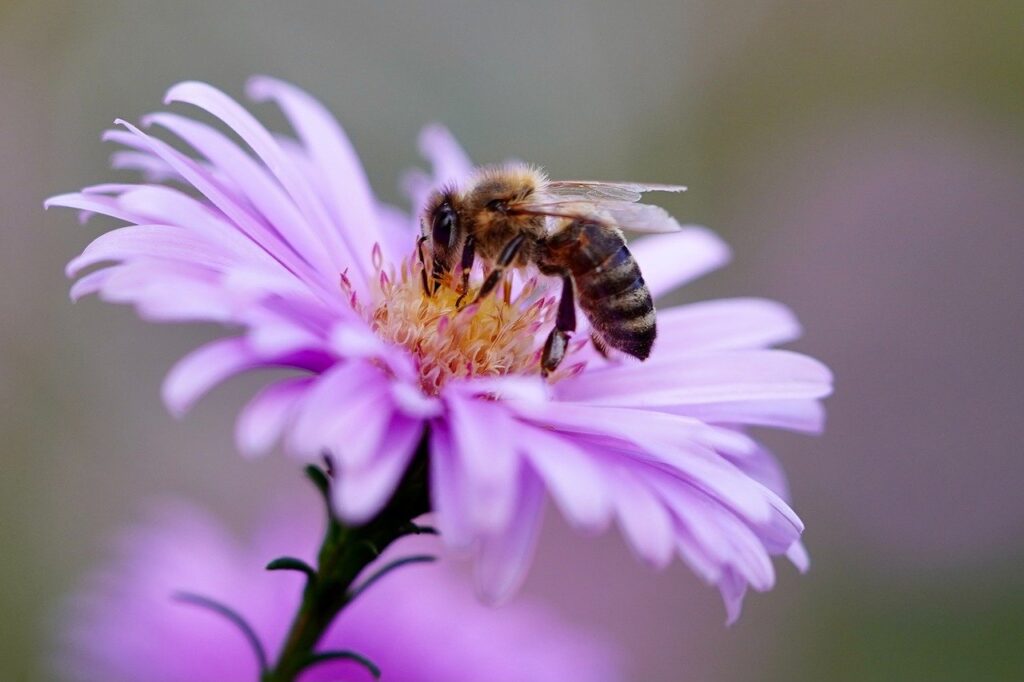