Last month I posted some thoughts about archetypes and poetry. These touched on the role of the unconscious in creativity and how studying archetypes can help create bridges between our inner and outer worlds. Archetypes reside at an unconscious level, but by lifting them into the light, it’s possible to utilise these universal images and ideas. A tarot pack is full of archetypal figures and this post explores how they might be used for writing poetry.

Jo Bell in How to be a Poet suggests ‘Poetry is part alchemy, part practical formula‘ (2017: 34). Alchemy is a useful word for describing the writing of poems. Combining science and magic, the alchemical process is not dissimilar to how solid words can frame more transient thoughts and emotions. To be an alchemist is to work with the transmutation of one substance to another, while poets need to utilise both realism and symbols, and be able to segue seamlessly between conscious and unconscious levels.

Sometimes a poem appears and you find yourself wondering where it came from, or weeks might pass without the magic happening. In the way an alchemist deals with multiple layers of reality, poets often work in those blurred spaces between the real and symbolic. For the times when the poetry gets stuck, I find tarot cards a useful stick for prodding the unconscious back into action.

A tarot deck consists of two parts; the major and minor arcana (arcana from the Latin for hidden or secret). There are clear similarities between the hearts, clubs, spades and diamonds of today’s playing cards and the swords, cups, wands and pentacles in the minor arcana. However, the origins of the major arcana are less obvious.

These 22 cards are full of archetypal images such as the Fool, Magician, and Lovers but their exact beginnings are unknown. There’s no references to tarot prior to the 15th century, and current links with the occult and mysticism can all be traced to the writings of Eliphas Levi in the 1800’s. Working with tarot involves accepting these blurred origins. It’s best to think of the cards as being less about where they came from, and more about how they’re used today.

The strength of the tarot is it can be whatever you want. Packs have been linked to numerology, mysticism, spirituality, occult, astrology, kabbalah, fortune-telling, a psychological journey, therapy, meditation and so on. The list is almost endless. The reason for this eclectic spread of beliefs is because the cards use the language of symbols, and this ensures everyone can relate to them on a personal level.

There are over a hundred different tarot packs ranging from traditional designs to more contemporary ones, many of which are themed. I recently added the Arthur Rackham deck to my collection because I’ve always loved his illustrations.

However, most of the time, I use the Rider-Waite deck illustrated by ‎Pamela Colman Smith. First published in 1909, there’s a picture story on each of its 78 cards. I’ve had this pack all my life and it’s the images underpin a collection of 22 tarot poems, one for each card in the major arcana, which is currently under development. The choice of pack is important. The design has to have lasting appeal and this one remains my go-to set for new ideas and inspiration. 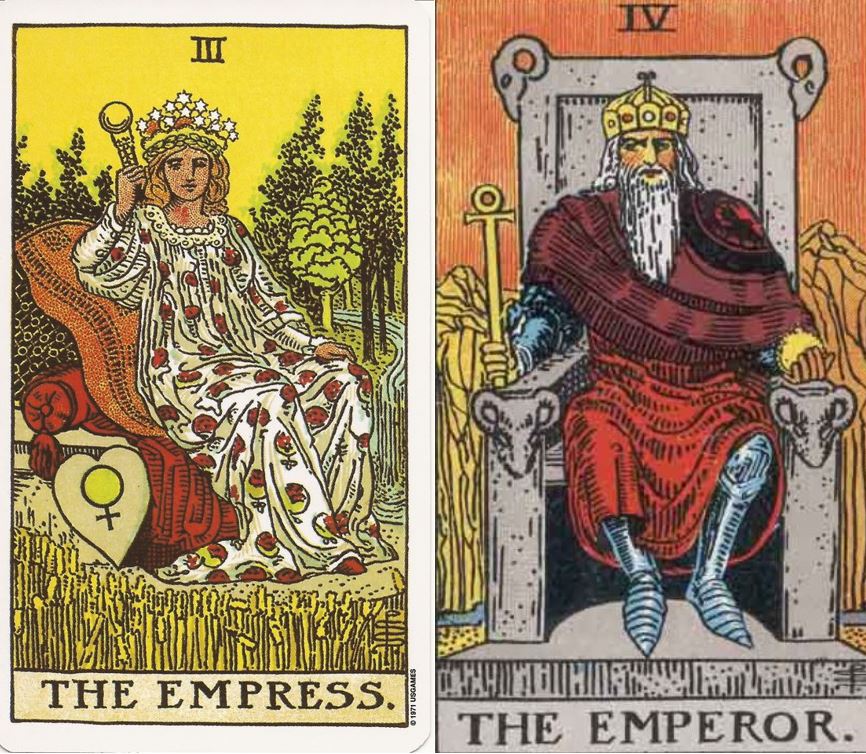 Connections with archetypes are clearly visible on most of the cards, in particular the major arcana.

For example, the Empress represents everything to do with creativity and the natural world. She is fertility, motherhood, abundance and femininity as opposed to the masculine energies of the Emperor, who stands for authority, leadership and control. 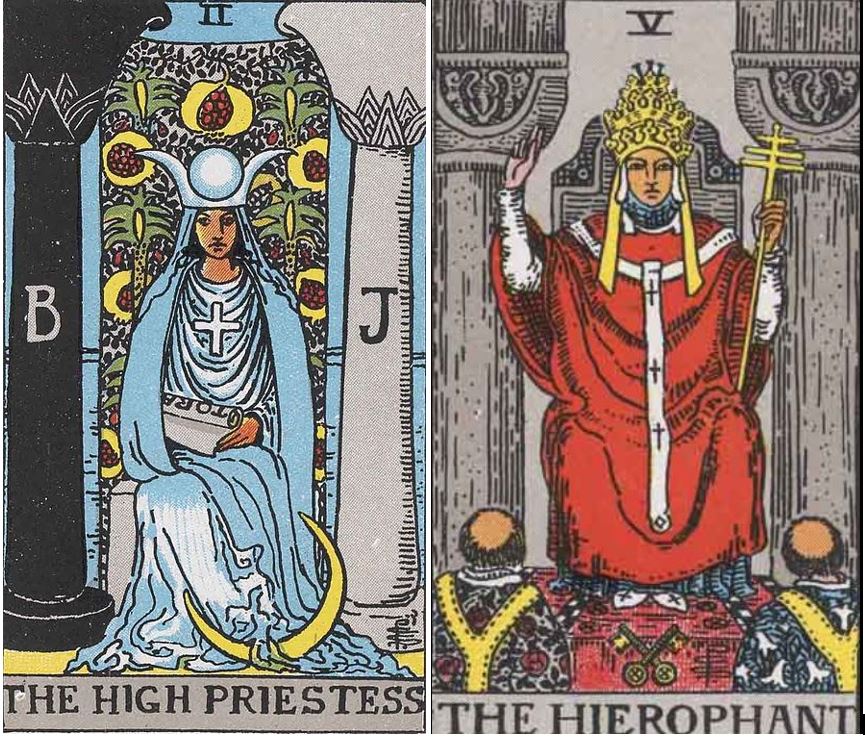 The High Priestess is also a feminine card, but whereas the Empress is about physical reality, the priestess represents the intuitive and spiritual world of the heart and mind, hidden behind the veil in her temple. The Hierophant is the male equivalent and stands for the physical dimensions of faith and belief, alongside a need for study and shared experience. While the High Priestess (initially called the Papess) is about solitary intuition, the Hierophant (or Pope) is more to do with bringing together people with similar spiritual attitudes and ideas. 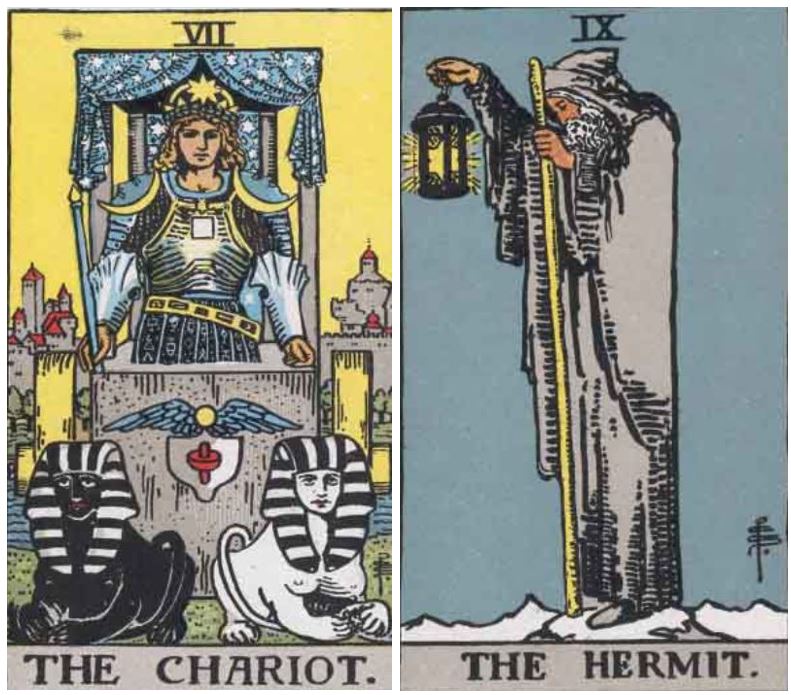 The chariot is another physical card. This time the individual is being torn between opposing forces, represented by two sphinx or horses. These are often shown in contrasting colours and facing opposite directions. The Chariot signifies a need for strength or willpower to bring disparate, sometimes contradictory, elements together. Physical endeavour is required to enable a destination to be reached, or a desire to be realised.

In contrast, the Hermit is silent and solitary. This card always reminds me of the archetypal wizard in myth and legend. His stick might be a wand (tarot wands represent the element of fire) plus he carries a hexagon star for light.  The landscape suggests standing on top of a mountain range, but there’s no sense of movement. It’s a card which signifies both consciousness and unconsciousness and the Hermit has learned to move between them with grace. 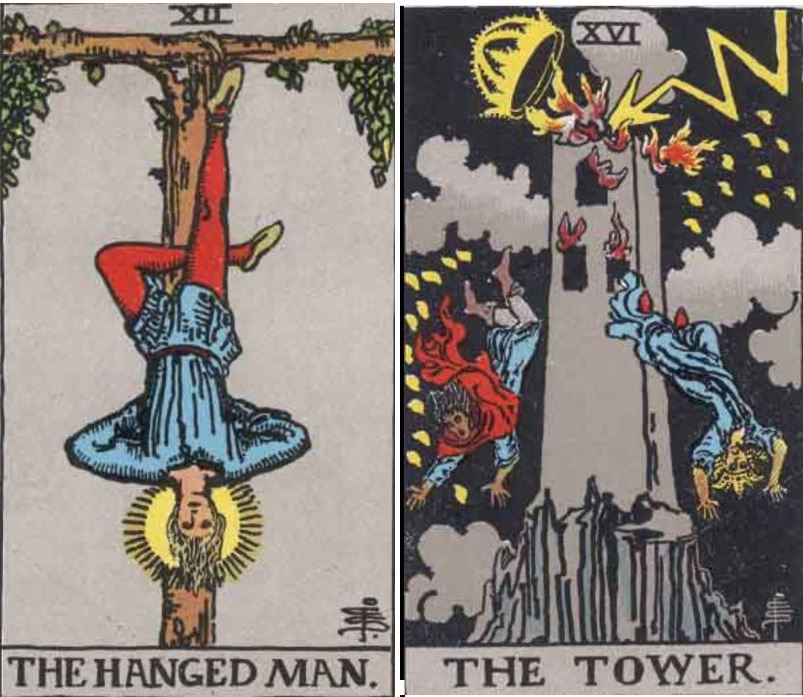 Other cards with clear connections to archetypes include Death, Devil, Sun and Moon. The origins of cards such as the Hanged Man and Tower stuck by Lightening are less obvious but they are equally full of symbolic meaning.

While each card represents a given set of ideas and images, they can also spark unique insight which derives from individual ways of seeing and being in the world. Used as prompts for creative writing, the tarot offers a valuable psychological tool for bridging real and imaginary and can stimulate creative responses from both the conscious and unconscious parts of ourselves.

The cards can be used as tools for meditations, or to stimulate a free-writing session. You can work with the cards singly, in pairs, threes, or even a circle. Here are some ideas to get you started.

Get to know each person. Do you know anyone who looks like they do? Swap their gender. How would they change if they were smiling, shouting or crying?  Encourage the characters to speak and listen to what they say.

Try it and see what happens. Use the comment box below to share anything unexpected or inspirational. It might feel strange but no one is watching and the experience may well be worth it! 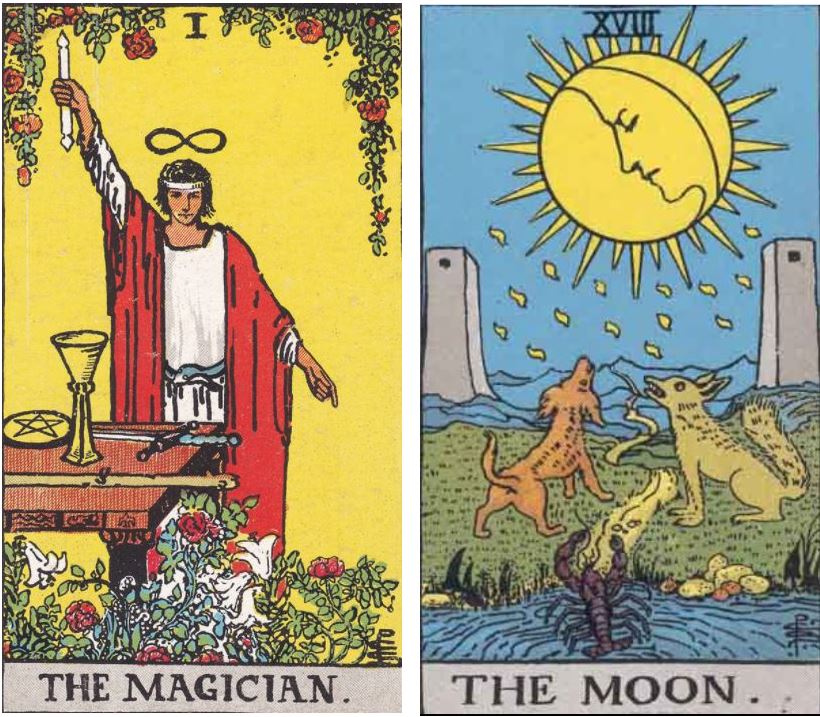 A future post will revisit the Walter Benjamin essay on The Work of Art in the time of Mechanical Reproduction (1936) and The Work of Art in the Age of Digital Reproduction by Douglas Davis (1991) to examine the notion of original work having an ‘aura’, which a reproduction cannot have but at the same time, challenge the exclusivity of a first edition. This will link to the advantages and disadvantages of the rise of internet poetry and poets.

tarot card images on this page from https://en.wikipedia.org/wiki/Rider-Waite_tarot_deck