Last year I had a colony swarm within a few weeks of it arriving on the allotment. I wrote about this in The Day the bees Left, with a follow-up post After the bees swarmed. If I’d known about tanging, I might have given it a try. Tanging is to hit a metal object, loudly and with enthusiasm. This is alleged to encourage the bees to return to their hive, or settle in a cluster above the head of the tanger.

There’s lots of references to tanging, both historical and contemporary. Search ‘tanging bees’ on YouTube for videos of beekeepers trying it out, such as the one below where the practice seems to make the bees change their minds about leaving.

This year I was determined to avoid another swarm situation, but determination was not enough. The swarming instinct is strong. Once it’s kicked in, it can be hard to persuade the bees to change their minds. Fortunately, my bees seem to have found a new first-stage swarming spot on the allotment behind me. Even more fortunately, Walter, my plot neighbour, loves them.

This is part one of the swarming story for 2021.

I met the first swarm on a warm sunny Sunday morning at the end of May, after several weeks of poor weather. I’d just arrived at the plot when Walter called for me. There was a cluster of bees, up the side of a fence post, and extending out onto the lower branches of a tree. Here it was, my first swarm of the year. 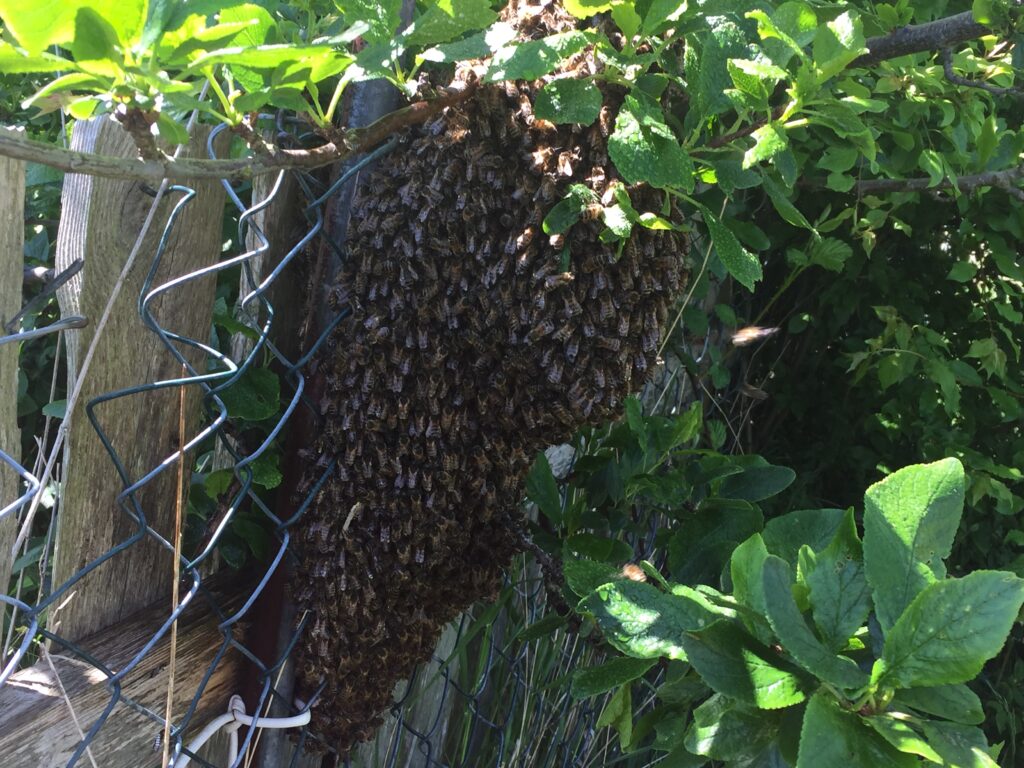 I did what most newbie beekeepers do and panicked. Mentor Patrick was having a cup of tea, Sunday morning style, but in the best mentoring fashion, was soon driving down the allotment road, booted, suited and ready to go. He loves bees!

Walter was fascinated. He said they’d arrived the day before. He’d filmed them and posted the clip onto Facebook.

He knew the queen was in the cluster, and that the bees would follow her, so was watching our every move with interest. Patrick cut back some branches and sprayed the cluster with water to help them bond together, before laying a white sheet out on the ground while I fetched a nuc to catch them in. The nuc was my first mistake. It was too heavy. The roof was a tight fit and the floor separate so, like all things in beekeeping, I learned by doing that a lighter box with an integral floor was a better option. In the role of assistant, I held the box as best I could under the base of the cluster, as Patrick tapped the branch and down it fell., covering me in bees. Patrick flipped the box over, stood it on the sheet and propped one end up so the other bees could walk in and join their queen. At least, that was the theory. You know when you get a bee on the outside of your veil, and for a moment it looks like it’s on the inside?

It took me a moment to realise it wasn’t an illusion. The bee really was inside. When the cluster fell and covered me, there must have been the tiniest of gaps somewhere and this bee had found it. Fortunately, it wasn’t bothered but I decided the best option was for us to part company.

Meanwhile, the bees continued to find their way into the box.

Patrick was full of swarm-catcher tricks such as having a queen bee suspended in a jar of pure alcohol and lemongrass so he could transfer her pheromones onto the swarm box. 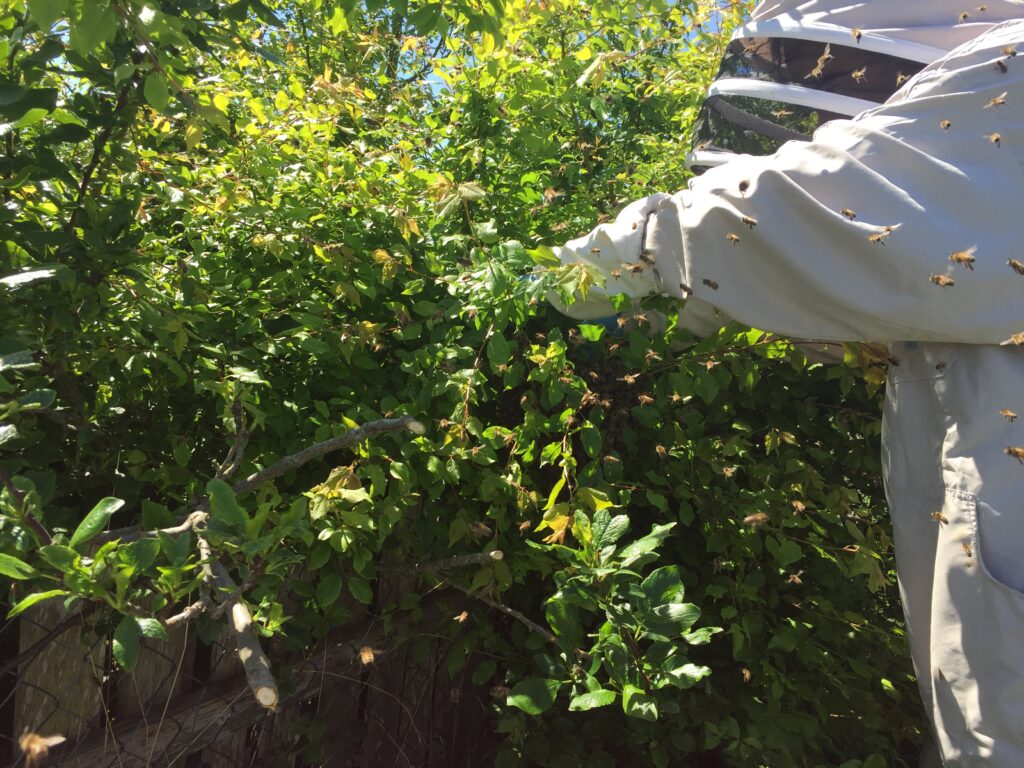 After a while, we noticed the bees were reclustering on a branch above the original swarm spot. This could have been a sign we didn’t have the queen, but as the bees were walking into the box, it might have been some stragglers who’d detected a smell of her. Maybe she’d rested on that branch during the initial flight.  Patrick brushed them in with a feather saying he preferred feathers because bees can get caught in the hairs of a bee brush and they don’t like it. The last thing you want is to upset a bee, especially a calm, happy one.

We also smoked the tree as this can disguise any lingering queen pheromones. Some beekeepers suggest using a deodorant spray or air freshener, but smoke feels more natural and, as you’re likely to have your smoker with you, it’s one less thing to carry in your swarm kit. 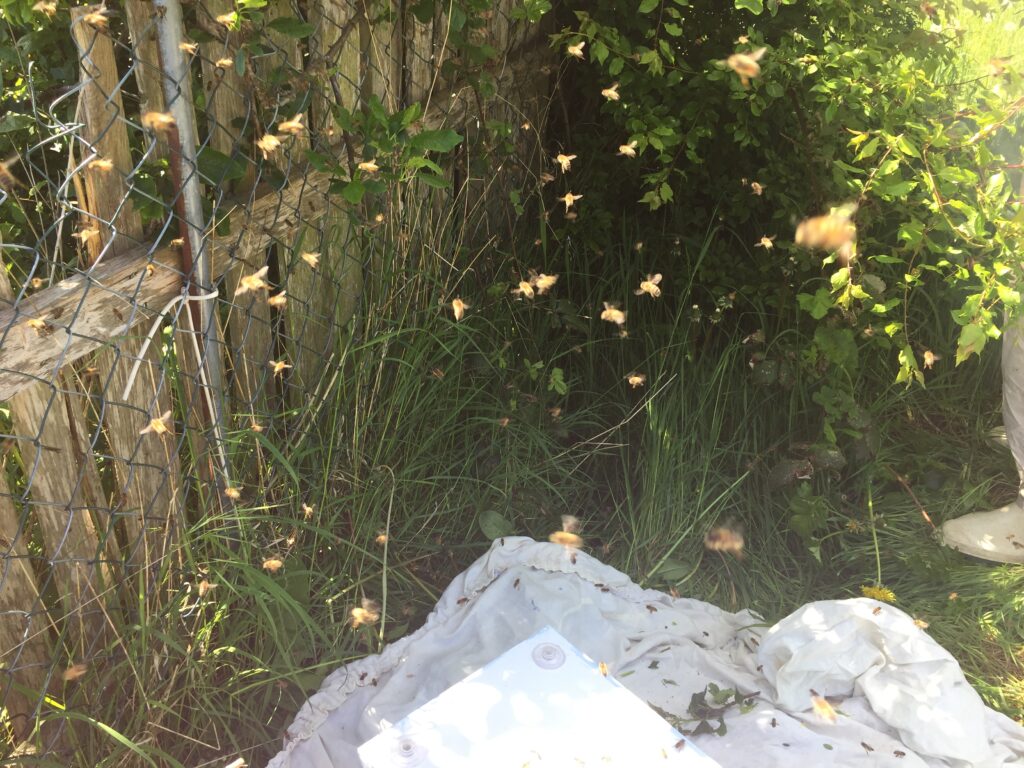 Finally, there were more bees in the box than were buzzing around, so Patrick wrapped it up in the sheet and carried it back to my allotment. As it was hot and sunny, we put it in the shade by the side of the shed, and I returned that evening to transfer them into their new forever home.

I got everything prepared, unwrapped the sheet, opened the lid and – nothing. The box was empty. I don’t know how they got out. I’d been working in the apiary later that day and saw no sign of escapees, plus the entrance was shut. However they’d done it, they were gone. I’d lost my swarm. 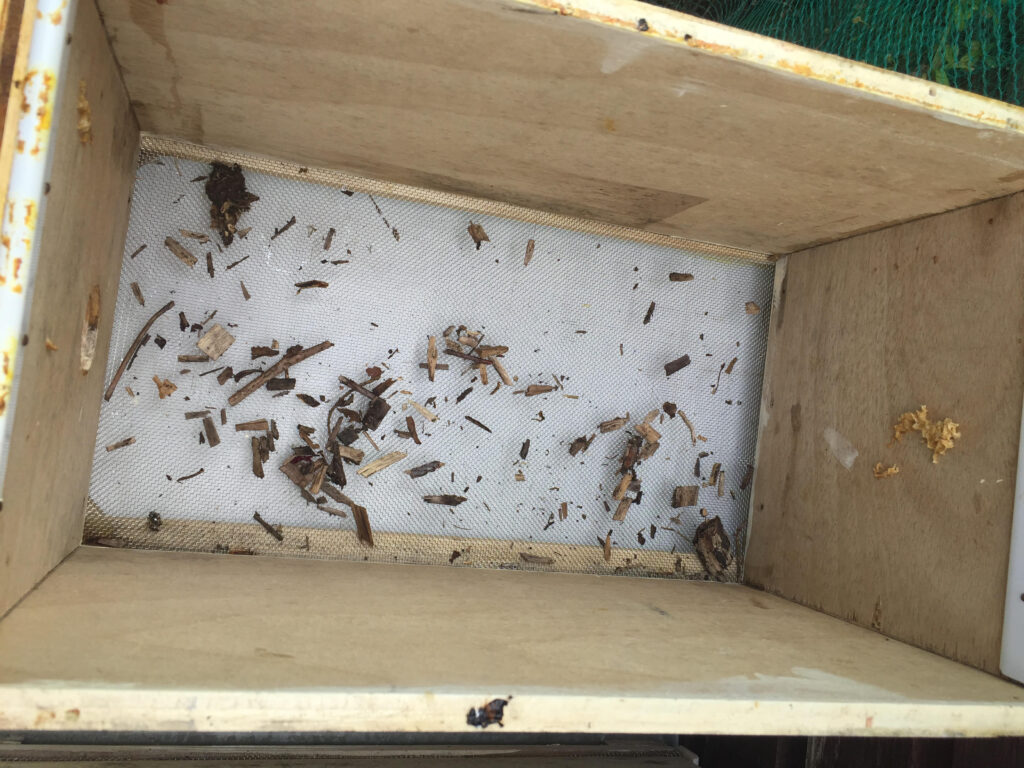 It had been a textbook collection. The cluster was reachable and close by. My plot neighbours were delighted to see the bees up close, and collecting them had gone well, but I’d lost them all.

Bees swarm in two stages. The first is where the queen and her attendants leave the hive and gather somewhere relatively close by, while scout bees determine their final destination. The colony then agrees on their new home and during the second stage, they fly off. The whole process from hive to new home can take several days.

Where they went, I’ll never know but the act of collecting them had been a new learning experience. This was useful because the following week, I received a call from Walter to say another cluster was forming, this time on one of his apple trees. I booted and suited up on my own, ready to go solo collecting for the first time. 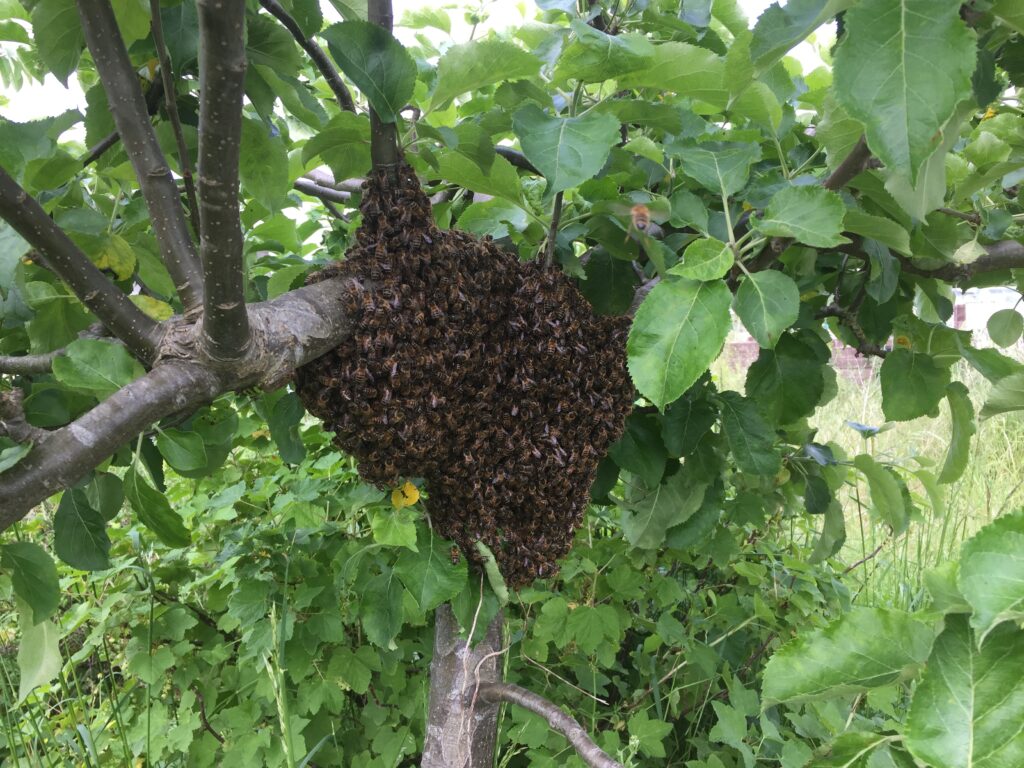